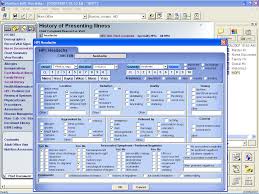 The hospital where I work one morning a week is changing it's electronic medical record system.  I've never like the current EPR because of privacy issues -- anyone with access can get into anyone else's record.  As an employee of the hospital, I don't like that so many people I know could read my medical record if I got my care there, and so I get care elsewhere.  HIPAA violation, you say?  Yes, but there's no up-front stop on looking at anyone's record, the violation and sanctions come if you get caught.

Aside from the privacy issue, psychiatry does not add outpatient notes to the record.  Appointments are recorded, and medications are placed in the system, but no notes.   The current system is easy to navigate, I can read medical and surgical notes if it's helpful to me, There's a problem section, a medication section, labs (what I need most) which easily let you click on one to compare the value to those in the past, and a radiology section.  I'm not sure exactly why the upgrade to EPIC, but for a mere $100 million dollars, EPIC is being phased in.  I'm in the third wave.  And yes, psychiatry notes will be included, though there is some system to mark notes as sensitive, and to get into these notes, the reader must click through an extra screen, a process called "breaking the glass."  A psychiatrist has been designated to monitor who breaks the glass, one more responsibility in his already busy job description.

Monday I went to the first day of my two-day training to use EPIC.  The screens are busy.  The instructors were good, but the booklet was not-- we were told to read several sentences ahead, meaning you couldn't just read and follow along.  I was not in the best mental state to concentrate, and  two hours into the training, I just shut down.  I got lost in the screen-after-screen and annoyed by the privacy issues --- good news, now any doctor in the hospital can go in and look at any other doctor's schedule to see which patients are scheduled.  Why is that necessary?

At some point, I realized that the new system means I'll have to sit with each patient at every appointment and start with the screen to verify allergies.  Each time.  As is, I have template forms I have to fill out at each appointment.  Now I can do all this while staring at a screen.   This is psychiatry?  What happened to listening to the patient?  Is there a screen for that.

I let my screen go black.  One of the instructors came by and asked about that.  "I'm done."  My brain stopped.  No more screens.  This is not the psychiatrist I want to be.  I sat through the rest of the day and and scored a 95% on the test module.  I went home and sent an email to the clinic: I'm resigning.

So I actually do want to go to the second day of the training.  I want to understand what it is I'm railing against.  I'll work until the end of July, just long enough to test out EPIC, not long enough to master it.

Maybe it's a mistake?  Maybe EPIC will add value to the practice of psychiatry?  I can't really say that I'm leaving because of EPIC, after 15 years, it's time.  I may be the psychiatrist with the longest tenure there now, and I've long ago lost count of how many different social workers I've worked with.   EPIC was the last straw, but I've been thinking of leaving on and off for a long time --oh, did I mention I've quit 4 times before?-- and I needed a nudge.

So does your institution use EPIC?  How's it going?  Is it good to have psychiatry notes in the electronic record?  Has your hospital had security breaches?  Tell me your stories, I'm all ears.
Posted by Dinah on Friday, June 07, 2013

EPIC is indeed an epic piece of crap. I had the extreme displeasure of having to use EPIC during parts of my psychiatry residency. There really isn't an EMR out there that is well-designed with the clinician in mind. Although I have to say, it's pretty much the norm most places for a doctor to be able to look at any other doctor's schedule, so I never had the expectation that my schedule would be private.

Thankfully, I've regressed to doing all my notes by hand; it's much more efficient (for me). The only thing EPIC helps is the billing department, and that's why hospitals and clinics keep implementing it.

Many year vet of EPIC. The only useful feature on the inpatient side was a button that allowed you to import and modify your previous day's progress note. That has now been declared criminal by the feds - no one wanting to admit that 99% of the documentation is clinically worthless and there for billing requirements. Also a click fest, electronic records are designed to eat up your time and add hours to your day. Good luck with that.

It won't be long before a psychiatric resident answers a question as to what is meant by a "Screen Memory" by saying that it refers to saving what he saw on his laptop.

I had a meltdown in Nevada yesterday, but the heat was ridiculous 116 at one point, so I'll go easy on myself. Not what you posted about but I'm outta town for awhile and don't want you to worry if I'm not commenting. Not assuming you do but I wAnted to test out point s ting with my new buggy kindle fire HD ugh stupid auto correct. 8)

I'm a med student at a school with multiple clerkship sites, so I've trained on several EMR's. I found one out of all of them that I liked to work with; I found another that I LOVED which was open-source and free, but never used in it practice since everyone seems to prefer paid products (I personally find the cost of EMR systems outrageous and exploitative). The one EMR that I liked the most was predominantly text-based; you could write up a SOAP note and the system would tally up the keywords for billing, which would be edited by the actual billers for errors. I LOVED this system since I love to type - unfortunately this was on my first rotation, so I had no idea how novel this was and cannot for the life of me recall the name of the system.

Digression aside, unfortunately, EPIC continues to be of the best systems I've worked with... however, that's not saying much. It might be one of the best, but that still makes it a pile of... well, y'know.

Things I hate: checklists. Boxes. Positives and negatives. I write a beautiful HPI, I get all the information that my attending wants, and still there are checklists reiterating what I ALREADY SAID in my lovely little note. As a result, the psych ER where I rotated came up with a form for students with all the little checkboxes so you can ask all the questions... useful for learning? I'm not sure. I felt like I was going through an algorithm rather than talking to a real person with real problems. I once tried to "freestyle" an interview; I asked 90% of the questions, but got yelled at and had to redo the entire interview with the list. I'm not saying I'm a perfect student - I still have residency ahead and everything - but the depersonalization is something that transcends medical knowledge and experience.

As referenced about the progress notes, there are pages and pages of numbers and ROS's that are completely meaningless yet forcibly tied to the record. Wading through EPIC notes to collect history on pre-rounds as a student can be a nightmare.

As to the privacy thing, I find "breaking the glass" to be a sham. Anyone with a password on the system can "break the glass" without issue. They may as well not have included the formality at all.

With all its issues, when tossed into a hospital or clinic which uses NextGen or Meditech, the winner is clear. The only people who love EPIC are people who have seen the wasteland of even worse EMR's and come crawling back to EPIC begging for forgiveness. Oh, EPIC, how you torture me.

sarebear: stay cool. I notice when you stop commenting.

Med student: oh how depressing. I forgot about the whole concept of learning to do a diagnostic interview. 20 years of practice and I still do a 2 hour interview, no template. I think our hospital is still doing dictated evaluations...not sure. Maybe we can't teach medical students to do psych evals anymore, maybe it's all check boxes that spit out diagnoses like codes.

I imagine that learning to interview without the very, very lengthy checklist would be a more organic process. I am hopeful that the strategy of the institution where I rotated was specific to that institution. Fortunately, even after being thrown to the sea of psychoses with only a list to rely on, I still fell in love with psychiatry and was able to practice a less algorithmic interview later while on the inpatient service. It has certainly given me a rather unusual set of criteria to judge my future residency program by - namely, which EMR they have and how they implement it in training.

I'm told it can be done with 'free text' in Epic.

Lets see... Violation of privacy and patients rights comes to mind. It's odd how psychologists, for years, had to request authorization from the patient to share psychiatric information with another health professional; however,
with the implementation of the EMR that authorization has been thrown out the window. Thrown out the window without any disclosure or forewarning to the client. Lumping it in with other "general authorizations" is not fair to the patient and misleading.

There have been many patients who have found out through accessing their doctors/hospital portal that their diagnosis and progress notes are now being shared with other,non-involved, healthcare providers. It's harmful to clients and most of all its harmful to the psychologist/patient relationship. Therapy is built on trust. Such systems weaken the trust and safety.