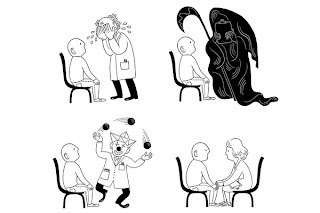 There was an article in today's New York Times called "When Doctors Grieve."  Leeat Granik mentions her mother's long battle with cancer and the family's relationship with her oncologist.  She is now a health psychologist and has just published an study done by interviewing 20 Canadian oncologists.  While I know nothing about the methodology she discusses, I found her conclusions, as she summarized them for the NYTimes, to be thought provoking:

We found that oncologists struggled to manage their feelings of grief with the detachment they felt was necessary to do their job. More than half of our participants reported feelings of failure, self-doubt, sadness and powerlessness as part of their grief experience, and a third talked about feelings of guilt, loss of sleep and crying.
Our study indicated that grief in the medical context is considered shameful and unprofessional. Even though participants wrestled with feelings of grief, they hid them from others because showing emotion was considered a sign of weakness. In fact, many remarked that our interview was the first time they had been asked these questions or spoken about these emotions at all.

The impact of all this unacknowledged grief was exactly what we don’t want our doctors to experience: inattentiveness, impatience, irritability, emotional exhaustion and burnout.

Even more distressing, half our participants reported that their discomfort with their grief over patient loss could affect their treatment decisions with subsequent patients — leading them, for instance, to provide more aggressive chemotherapy, to put a patient in a clinical trial, or to recommend further surgery when palliative care might be a better option. One oncologist in our study remarked: “I see an inability sometimes to stop treatment when treatment should be stopped. When treatment’s futile, when it’s clearly futile.”


I wondered if  one or two (or a few) psychotherapy sessions might help doctors who deal with death or other difficult patient issues?  Might brief psychotherapy give these doctors a chance to  express and explore difficult emotions in way that might make them more comfortable with their feelings --even social or culturally unacceptable feelings-- and be more aware of how these feelings are impacting their work?  It's just a moment of wonder.  I don't want this to be read as a wish to medicalize normal emotions or to suggest that all oncologists need long-term psychotherapy, or that such a thing even be required, it's  just a question of 'what if' such a venue were easily available in a non-stigmatizing environment?  What do you think?  Maybe it's just the sort of thing one should feel comfortable talking with colleagues, or a nice spouse, about, though I think the point of the article was that it isn't okay to talk about these things without being seen as weak or troubled.

I think psychotherapy would be very helpful for doctors who are dealing with this. In general, I think both the patients and the doctor would be better served by doctors who openly share their feelings. Why can't a doctor tell a patient that it pains the doctor that the patient is so ill? Why shouldn't a doctor allow the patient to choose between aggressive treatment and palliative care, by giving enough information to the patient to make an informed choice? Care should be patient-centered. I think when doctors try to be God, they open themselves to more guilt. If a patient were to choose aggressive treatment (I only have a 5% chance of living but I am going to go for it), then the doctor would not have to carry the burden. By all means express grief to the patient. The patient may well need help in expressing his/her own feelings about impending death and be relieved and complimented that the doctor cares. Also, send the patient to psychotherapy for emotional support.

I have not been a patient of an oncologist, but I have had dogs who had cancer and have gone through surgery and chemotherapy with dogs. My veterinarian does not have the problem as outlined in the article. He expresses his feelings and frustrations with not being able to do more or with doing too much at times. He cries at the end of my dogs' lives. He mourns with us. Earlier in his practice (I have been using him for 30 years), he was more aggressive in his treatment. Over time he has learned when aggressive treatment may save a life and in what cases the result is prolonged suffering, so his advice has gotten more wise as he reflects on the results of his practice. A feeling practitioner is a gift to his patients if he uses his feelings to inform his practice, rather than buries the feelings.

I think doctors shouldn't tell a patient that it pains them that the patient is so ill, because there's a therapeutic relationship, an imbalanced power/authority relationship, and I can see if a doctor told me that I might feel like I should agree to more aggressive treatment than I might want, because their distress distresses me.

On the other hand it's a kind thing to do, both to let the doctor express the emotion and for the patient to know the doctor cares; I think if it could be worked out HOW to express to the patient (in addition to of course good medical care, and good bedside manner) then that would be a positive thing all around.

I know when I had my first knee replacement, one of the last things the surgeon said to me in the small room they park you in just before surgery, was, "You're 37. I really don't want to do this at your age."

It didn't sound rude to me, it let me know that he cared that this was an unusual thing for my age, and that he wished there was a better, less invasive/drastic measure for me. That he wished I didn't have to deal with this, and the effects later on down the road that having a replacement so relatively early in my life, might mean (cause they can only replace stuff a few times, etc.) That he cared about my future, about my health, and everything.

Yeah, that's alot of things to feel from what he said (and how he said it; how he looked at me when he said it, tone of voice etc.) But it's what I felt then, and still do now.

The other half of that situation/statement came post-operatively, up after the recovery room, in the hospital room. He told me, "After I got in there, I saw that there was no choice; things were past the point of doing anything but a replacement. I saw that this was the best we can do."

Words aren't exact, but the sentiment is the same. It again expressed that he wished there was something lesser that could have been done, but that medically he saw that this was the best that could be done for me, which also gave a feeling that he was expressing a little bit of his limitations as a doctor and surgeon; that he acknowledged that sometimes the best you can do isn't the most ideal, but that they do the best that they can for you.

I don't know how to translate that sort of thing over to oncology, but there must be some way to convey a caring a concern that doesn't create a pressure in the patient to feel/deal with the doctor's distress. That it feels more, "Oh, he cares, he's not just concerned about clinical outcomes, but about my welfare as a person."

What my surgeon did felt very much like he was acknowledging me and my situation as a person, and not just interested medically in the outcome.

Then one time I had an anesthesiologist who acted like he was God's gift to humanity, and regarding my mental health issues, he said something to me that I heard House on that tv show say the exact same thing to a patient with similar issues, a few weeks before. It was quite cruel, stigmatizing; Prejudicial, definitely. COLD. (He treated a female medical tech in there like he was God's gift to her and all women, too.)

I think brief psychotherapy for oncologists and others with alot of patient deaths, at least more than other medical professions, would be good. Make it something that's available and at least mildly encouraged across the board, to help reduce stigma . . . or something. Maybe every three months, they go for 2-3 visits or whatever they need.

And I wish all psychiatrists, psychologists and social workers were required to sit in a room and discuss personal issues with a stranger a couple of times a year.

I am of the opinion that everyone could benefit from therapy.

That said, before a patient even gets to an oncologist, the primary care provider needs to have that conversation with the patient about what life means to the patient. What are they willing to do? Not do? What are their beliefs? How do they see themselves dying?

I think conversations like this could go a long ways towards developing plans that partner with the patient, providing expert advice that fits with the patient's personal philosophy and just how far they are willing to travel down that road.

It would eliminate problems with "non-compliance," with prescribing medications patients never intend to fill, let alone take. Endless conversations on tobacco cessation, drinking, overeating or any other maladaptive coping behavior could be addressed with a simple question: "Are you ready yet?" Oddly enough, I think some of the resistance some patients demonstrate to recommendations might go away when the patient comes to that conclusion by him or herself.

But we ALL need some time on the couch. Whether it's talk about life and death and futility and regret---or something more mundane. That I firmly believe.

I don't agree that we all need time on the couch. We all need someone to lend an ear. It doesn't necessarily need to be a shrink's ear.

I agree with anon that needing someone to talk to is not the same as needing a shrink. I am of the opinion that some people benefit from therapy, some people not at all, and some people are actually harmed by it. All depends on the person (and perhaps the shrink).

But back to the point of the article - if this is a problem for doctors, there should be some sort of outlet where they can discuss it, shrink, support group, or otherwise.