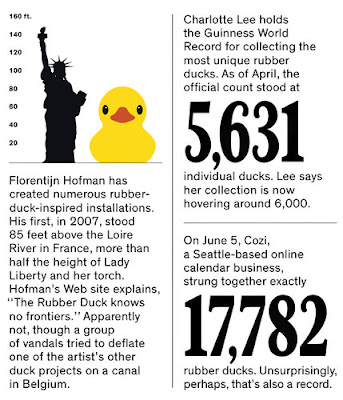 Those of you who are regular Shrink Rap readers know we are rather attached to the image of the yellow rubber duck.  It started with an article on Emotional Support Animals that was in the New York Times right after we started our blog, and we latched on to the imagine of airline passengers who brought ducks (one dressed in clothing) on to flights, and then Clink began her years-long hobby of animating ducks!  And of course there was the lovely reader, DrivingMissMolly, who donated a flock of ducks to Heifer International in our behalf.  The duck appears on our blog, it was the subject of heated debate and designated committee meetings when our book was in press (see They Nixed the Duck!) and it's on our logo in the print version of our column on Clinical Psychiatry New.  We distribute candy ducks at all Shrink Rap public events.


Needless to say, I was quite pleased to see an article in this morning's New York Times Magazine on the history of rubber ducks.  In "The Rubber Duck Knows No Frontiers,'  Hilary Greenbaum and Dana Rubinstein write:

This yellow, doe-eyed icon — a preferred bathtub ornament of toddlers and royals alike — would have never existed were it not for Charles Goodyear. The Massachusetts inventor discovered the chemical process that renders rubber more malleable (and thus appropriate for toys) by, as legend has it, inadvertently dropping a mixture of rubber and sulfur into a potbelly stove. Goodyear, who died in 1860, never benefited from this discovery, but his vulcanization process revolutionized the rubber trade.

Greenbaum and Rubinstein go on to note:

Still, it was only when Ernie, of Bert and Ernie fame, took a bubble bath with a rubber duckie in 1969 that the toy became inescapable. According to Tim Carter, a senior producer at “Sesame Street,” the story goes like this: Someone gave a rubber duckie to a “Sesame Street” writer named Jeff Moss, who put it in his bathroom window. One night while taking a bath, Moss looked over and had an epiphany. And “Rubber Duckie” subsequently reached No. 16 on the Billboard chart. “It wasn’t until ‘Sesame Street,’ ” says Charlotte Lee, a Seattle-based engineering professor who holds the Guinness World Record for the largest collection of rubber duckies, “that a rubber duck became a special thing.”

So there is a whole lot here, lots of topics. I am going to throw out a topic I have been wondering about and will hope that maybe someone wants to do a blog post on that. Here goes. Roy has mentioned at some point, that he has family members with mental illness. I think he said schizophrenia but could be mistaken. There is no way that Roy is the only psychiatrist to have mental illness in his family since no one is immune.So does anyone know of any studies that have looked at psychiatrists who have major mental illness in the family, and how that affects their views on psychiatry , on stigma, on the transference or even if it does at all?

I find your rubber duck references and graphics amusing and a nice light-hearted touch in the blog. This post prompted me to read the Wikipedia entry "rubber duck", which mentioned rubber duck races for charity which, though later than the song "Rubber Ducky" have kept rubber ducks in the public eye and captured my attention. I remember the simple rubber ducks of the 50's, though, before they became "famous" and how surprised I was when the duckie "took off".