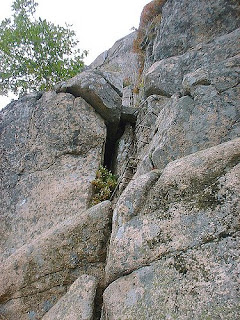 Subtitle: "Blood On The Bike"

I'm back from vacation. Roy's been posting about his camping experience in Maine and by pure coincidence I also planned my summer vacation to Acadia National Park. I called Roy and tried to catch up with him, but for the most part I didn't have cell phone coverage when I was there.

Let me start by saying: it was wet. More than wet, it was a deluge that first day. The tent held up with only mild dampness, but I knew I was in trouble when a park ranger stopped me on the way back from my hike to warn me to take shelter. He said there were 60 mile per hour winds predicted, with lightening and hail. Yes, it was wet. There wasn't any hail and the wind wasn't that bad, but we did get three waves of lightening storms through the night. Since it couldn't get any worse, I went for a swim in the ocean in the rain. Cold truly can be painful, and that water was frigid.

Day Two was drizzly and overcast, but clear enough to ride bikes. I made it up Cadillac Mountain (1500 foot elevation) at all of about 4.5 miles per hour. It took about an hour to get to the top, but the ride down was fantastic. I had to keep braking the whole way down to keep from flying off the edge of the switchbacks. I was at the bottom in about seven minutes.

Day Three finally gave us a break in the weather, enough to get some hiking and more biking time, as well as a nice sunburn sitting on Sand Beach.

The most unique part of the whole trip was the climb up Mount Champlain. Now, this climb is optimistically referred to as the Precipice Trail but it's not a hike by any stretch of the imagination. It's pure rock climbing. There's a sign at the bottom of the mountain that warns people not to bring children up because people have died on the climb. I was too busy trying not to slip, digging my fingernails into solid rock, that I didn't take any pictures. Besides, I knew some other brave or foulhardy soul with better photography skills had probably already put some pictures up on Flickr so here is a link to those pictures of the Precipice Trail. (It's steeper than it looks in the pictures.) I've never been so terrified. There are iron rungs you can climb, but what they don't tell you is that when you're as short as I am there is sometimes a gap between rung sets that requires you to traverse over a narrow sloping ledge that hovers over a steep plummet. By the time I got back to the base I wanted to shout "You're all going to die!" to anyone starting up the trail. I resisted.

By this time I was dirty, sunburned, sore and needed a hot shower. Badly.

Thank goodness for Isle Au Haut. More specifically, for the Inn at Isle Au Haut. It's beautiful but isolated, and you can only get there by mail ferry. Innkeeper Diana Santospago took me in, tucked me into an amazingly soft bed and then fed me incredibly good food for two days. I had sea scallops with cream sauce, squash fritters, mushroom onion soup, soft-shelled lobster, stuffed squash, triple chocolate cake surprise (you have to guess the surprise), as well as hand-packed lunches for the day trips. I wasn't surprised to learn I had gained a couple pounds while camping in spite of the 1500 foot bike ride up the mountain, the climb up Mount Champlain, and the 50 mile ride I took after I got back to Acadia. The Inn was a perfect break even for a seasoned camper. The side trip to Isle Au Haut was rounded off nicely by a stop at Black Dinah's chocolate shop where I took shelter from yet another downpour. (Well OK, the truffles were a good reason to stop, too. They were delicious, not to mention quite beautiful.) I was treated to a short game of Scrabble to while away the time until the ferry took me back to the mainland.

OK, so to tie this in to psychiatry---this is a psychiatry blog, right?---I have to mention that I didn't really 'get away from it all'. During one breakfast stop I couldn't help overhearing the man at the next table explaining to his party what the Mini-Mental State Exam was and what it was used for. And at the Inn, one of the other people staying at the Inn while I was there was a psychiatrist. It's a wierd, small world but fortunately still a protected and well-tended one at Acadia National Park.
Posted by ClinkShrink on Monday, August 11, 2008

My hat is off to you for climbing those rungs. Sounds like a wonderful break.

You seem awsome in every way!
I am glad you had fun!

As I read your account of the Precipice Trail and it's iron rungs, I was reminded of the hike to the top of Half Dome in Yosemite NP. It's about a 7.5 mile (~5-6 hour) hike with the last 900 or so feet straight up (or so it seems) up a slick granite dome. From May - October the park service puts down thick steel cables to use as handrails and almost-rotten out 2x4's as steps (each about 12 ft apart). There is a constant stream of people going up and down the cables -- so in addition to focussing on your footing and hand hold, you need to deal with the oncoming hiker. It is amazingly exhilarating and scary -- but worth it.

There are some great photos on flicker (search: Half Dome Cables):
http://www.flickr.com/search/?q=half+dome+cables&m=text

glad you made it home in one piece!
enjoyed meeting you at the inn.

Fair enough re. the overheard breakfast table conversation, but how did you learn of the other psychiatrist's profession - was he/she someone you were already acquainted with? Or was it a case of "I'm a doctor and I want my sausages!"? ;-)

Greetings from my vacation: 75 and sunny, a block from the beach, good food, sight seeing, today younger teen was our captain while we went sailing.

Dinah, hurry home the blog needs you. I'm still catching up at work. If I get struck by some exciting blog topic I'll post if I can.

Roy, are you home safe yet? Are you dry?

when I was in Bar Harbor just a couple of weeks ago, the precipice trail was closed because the nesting peregrine falcons had a habit of divebombing and injuring passers by. :)

I did think that the Seawall, wonderland, and bass harbor light trails were really pretty though.

I drove over to Bass Harbor but it was mainly to check out the lighthouse and the campground. It was too dark to do any hiking. The stars were incredible, and a full moon too.

Next time you come to my state, drop by for a shrinkly visit! Sorry you had the soggiest week in recent memory... it finally got sunny yesterday : )

It was gorgeous even when overcast! Now whenever it looks like a torrential downpour is about to break loose, I say, "Looks like camping weather..."